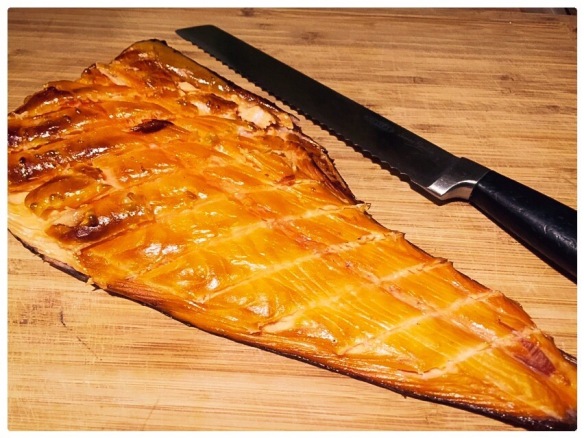 This summer I had planned on making a smoker. I was going to use an old oil drum or something similar for the job. It suddenly dawned on me that I had the perfect smoker already made, our clay oven. This is perfect why hadn’t I thought of this earlier. The oven is the perfect shape for smoking food. I bought a bbq fish holder for the cuts of fish. Once the fire was lit I placed the fish holder up the chimney flu and let the smoke take care of the rest. 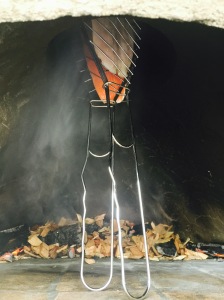 To start off with I let the fish soak in brine for an hour. For the brine, I filled a large bowl with cold water and added a generous helping of sea salt and pepper. I also added a few bay leaves and star anise for little extra flavouring. After an hour of soaking in the brine I rinsed the fish off and placed it into the holder. Be sure to grease the holder first to prevent it from sticking, as I learned. Next I lit the fire as normal using untreated hardwood. I had a basin of hickory wood chips soaking in water and once the flames started to die down I threw the wood chips on the fire and let it do its magic. I closed up the oven and waited. The whole cooking time can range from an hour depending on the size of the cut. On the first attempt I smoked a cut of sea trout and some mackerel. On the next attempt I went with a super cut of salmon, which I let go a little longer, nearly 3 hours in total. All three fish were incredible smoked. The salmon was eaten as is with some brown bread. We also added some flakes of the salmon to a homemade fish pie. With the sea trout and mackerel I made a magnificent spread for toast. I was very happy with the over all result. Now I can’t wait to smoke some of our pork in the clay oven. Watch this space for more.